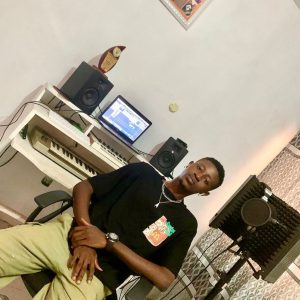 Alapafuja Babatope Olanrewaju popularly known by his stage name, Kiel Tee  is a multi-talented Singer, Songwriter And Music Producer who has over the years built a name for himself in Nigeria’s music industry as a whole.

Alapafuja Babatope Olanrewaju professionally known as “Kiel Tee” grew up in Osun state Nigeria. However born in Lagos State on the 19th of Feb. 1994. Kiel Tee is a Graduate of Osun State Polytechnic Iree

He Started music carrier in 2010, which his first studio record is in 2012 tagged “ My Time “which was
Produced by Hemma Production

The unlimited support he got from his Parents and Friends influenced him to keep learning and keep growing in the music crafts.

The musical guru has always stated how good songs should be appreciated and heard only. His songs has always made a difference in the musical circle in Africa bringing out more potential from the African Culture Which He Represent

None yet but open to any

In five (5) years I see myself making Big moves in the music industry.

Hey Lovelies I love y’all. Keep your eyes & Fingers cross on Kiel Tee and trust me it will only get bigger and better

Music found me and it became a lifestyle.

My personal philosophy in life is “I was born to Stand out not trying to fit in” and this inspires me on a daily.

What inspires your music

Life itself ranging from Love, Heart break, Happy moments, Situations down to the Hustle inspires, I joined music because its what I can do special and to make life out of the street

Adekunle Gold, Wizkid, 2Baba, Wande coal & Davido Their songs inspires me and I hope to work with them someday soon.

Kiel Tee is a young hardworking music producer whose life revolves mainly around music. Going by his social media activities, it can be deduced that wherever music exist is where you will find Kiel Tee.

Kiel Tee Music Singer, songwriter & Producer is very active on Social Media’s as he engages with his fans on a daily basis.

You can Stream his Latest Single “Fake Love” on DIGITAL PLATFORMS