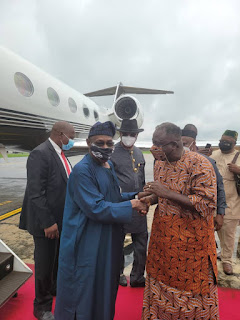 Today being July, 20th 2021 Mr Aniekpeno Mkpanang received the former president of Nigeria Mr Olusegun Obasanjo from the Akwa Ibom International Airport, Uyo when his flew in for the commissioning of the newly constructed Fly-over at   Ikot Oku Ikono in Akwa Ibom state.

The newly constructed Fly-over is said to have a linkage with the Olusegun Obasanjo Way which was said to be named in honour of the Former President.

It was a nice reunion at the Airport and you could see the senergy and bond in their faces.