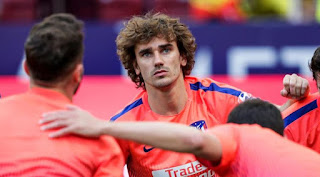 By admin
Antonio Griezmann
Antoine Griezmann will not replace Philippe Coutinho at Barcelona at the end of the season, according to the Brazilian’s agent.

Despite an encouraging start to life at Barca, Coutinho has failed to recapture the form he showed at Liverpool before his €160million switch in January 2018.

This term, the attacking midfielder has managed only five La Liga goals in 34 appearances and failed to nail down a place in the starting XI, with 12 of his league outings coming from the bench.

Coutinho’s underwhelming form has seen him become a target for Barca supporters who have jeered him on several occasions in recent months, while media reports have linked him with a move.

Griezmann’s announcement on Tuesday that he will leave Atletico Madrid in the coming months will likely increase speculation surrounding Coutinho, though his representative is convinced the Frenchman potentially joining Barca will not impact his client.

“It’s untrue that Griezmann is going to replace Philippe at Barcelona,” Andrea Bertolucci told AS.

“I don’t know why they are saying that. I don’t know about that and that’s why I don’t want to talk anymore, but it’s false.”

Coutinho has a contract at Camp Nou until 2023 and is said to be interesting Manchester United, who look set for a major rebuild over the close-season.

Barcelona have already wrapped up La Liga, as the club has amassed 86 points to Atletico Madrid’s 75 through 37 matches.

The champions will wrap up the La Liga campaign against Eibar on Sunday while Atletico Madrid take on Levante on Saturday in their final match.

Barca will then turn focus towards the Copa del Rey, where they’ll face Valencia in the finale. (Goal)I