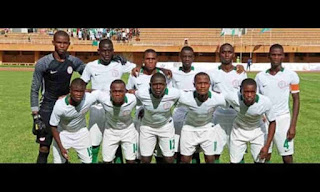 Overview Of: Just In : Top 3 Key Eaglets Players To Watch Out For In Tanzania [ Must Read

The Golden Eaglets took off to Tanzania for the 2019 U-17 Africa Cup of Nations with high expectations as they seek their third continental glory.

The Nigerian side have been dominant on the World stage with five titles but are yet to replicate that in Africa with two titles won since the inception of the competition in 1995.

But Nigeria have produced some of Africa’s greats since the start of the tournament.

Concise News brings to you three key players who have shown prospect in the current Golden Eaglets squad.

He is one of the reliable players in the squad. He Has been an integral part of the team from the outset and has contributed to the success of the team so far. Gentle-looking but he can be as hard as the nail on his defensive assignments. He has good speed and often joins the attack when the need arises.

Languid looking but Alfred is of sterner stuff and he’s regarded as the engine room of the team. Played a pivotal role in ensuring Golden Eaglets’ qualification for Tanzania 2009 and has been one of the super regulars in the squad.