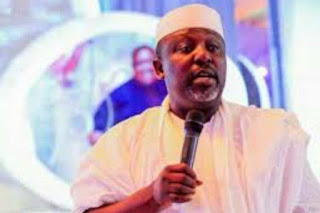 Overview Of: JUST IN : Rocha’s Okorocha Exposes APC and Buhari Once Again [ Must Read

Okorocha, in a statement released through his Chief Press Secretary, Sam Onwuemeodo, insisted the president is too “descent and does not have an appetite for lawlessness like Oshiomhole in running the affairs of APC”.

According to the Governor, “Adams Oshiomhole has done so many strange things within the party and it will be wrong for anybody to think that President Buhari on account of his penchant for decency, honesty, and forthrightness, will be on the same page with the national chairman.”

He further said that “the national chairman of the party has told the world that he wants to ensure party supremacy and he has been doing so to the best of his ability because from all indications, he has his own idea of party supremacy.

“Oshiomhole’s idea of party’s supremacy could be the purported suspension of two governors on the platform of the party a few days after the presidential and National Assembly elections in which the party did well without any contribution from him,” Governor Okorocha stated.

“The president was voted for by Nigerians across the geopolitical zones because he has proved to be real and can be trusted. When he said ‘I am fighting corruption,’ you see it happening. It cannot be the same thing with someone who sold the tickets of the party to the highest bidders.

“We are yet to see any living Nigerian who could have defeated President Buhari in that election. He has earned the confidence and trust of most Nigerians.

“In states where he lost, you could see traces of wanton manipulation and mutilation of election figures like in the case of Imo.

“In other words, the president has nothing to do with Oshiomhole’s disdain for the right actions and the chairman’s charity for lawlessness and total disregard for the party’s constitution,” he added.