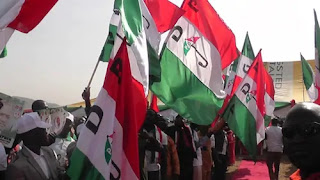 Overview Of: 24 PDP Members Decamp To APC 24Hours To Election In Borno State [ Must Read

Defection has hit the Peoples Democratic Party (PDP) in Borno state less than 24 hours to election as the party’s secretary, Baba Ahmed Mustapha, and 12 local government party chairmen decamped to the main opposition, All Progressives Congress.

Several youths leaders and a women leader also defected from the party.

Baba Ahmed Mustapha, the party secretary, said he defected from the party because of injustice and indiscipline that characterised the state chapter of the PDP.

He said: “I defected to APC because of injustice and deciet in Borno PDP. 24hours to the election, you cannot feel the presence of PDP with no campaign even days before the election.

“PDP has a flag bearer, but he has since remained mute without campaingning, which means a deciet on the people. It really means that the candidate is deceiving people.

“The result of my defection with others will be reflected in the ballot box tomorrow. I call on other members of PDP to come and join progressives to move Borno to the next level.”

Meanwhile, Legit.ng earlier reported that no fewer than 41 political parties had fielded candidates to contest the forthcoming governorship election in Borno state.

Alhaji Mohammed Ibrahim, the state INEC Resident Electoral Commissioner (REC) disclosed this in an interview on Wednesday, March 6, in Maiduguri.

He said the candidates were contesting the election under 41 parties, including the ruling All Progressives Congress (APC) and major opposition Peoples Democratic Party (PDP).